You are here: Home1 / Places to Visit2 / Tory Island Donegal

Toraigh, or Tory Island, nine miles north of the coast of Donegal, is by common consent “the most isolated, the most desolate, the most windswept of any of the Irish islands”. It is an island drenched by the sea, drenched by the elements, and drenched with history and folklore. According to some scholars Oilean Toraigh means island of the outlaws or pirates, perhaps a reference to the mythical tale that it was inhabited by the sea-faring Fomorians. Their king was Balor of the Evil Eye, also known as Balor of the Mighty Blows.

Balor’s one eye had to be kept covered most of the time, such was its force for destruction. He was killed by his grandson Lugh, who represents goodness and light in mythology, in direct contrast to dark, malign Balor.

According to some scholars Oilean Toraigh means island of the outlaws or pirates, perhaps a reference to the mythical tale that it was inhabited by the sea-faring Fomorians. Their king was Balor of the Evil Eye, also known as Balor of the Mighty Blows. Balor’s one eye had to be kept covered most of the time, such was its force for destruction. He was eventually killed by his grandson Lugh, who represents goodness and light in Irish mythology, in direct contrast to dark, malign Balor.

In the sixth century Colm Cille came to Tory to convert the islanders, and while not sweeping away all that went before, left a legacy stronger than anyone who visited the island before or since. He came to the island following a vision that told him to build a monastery there. According to one legend his journey to Tory was made easy when “God opened the waters of Tory Sound for him and he walked across to the island”.

Tory folklore has a different version: Colm Cille along with Finian and Beaglaoch stood on top of Cnoc na Naomh (hill of saints) in Magheraroarty and tossed their croziers into the sea to decide which of them would convert the island. Colm Cille’s crozier not alone went farthest, but reaching the island made a small crater on the north east cliffs. Cassie's Cottage Fanad is a charming 6-bedroom family home with a modern twist, situated in the tranquil area of Kindrum

More recently Tory has been associated with another remarkable man, the painter Derek Hill [1916-2000], whose encouragement of the local men who watched him paint on his trips to Tory led to the creation of the Tory school of painters, a tradition continued today by people like Patsy Dan Rodgers, the ‘King of Tory’, Anton Meenan, and Michael Finbarr Rodgers.

Despite its small geographical size, Tory Island is rich in historical and mythological sites, often tied to the island’s beautiful and dramatic landscape features. A blend of Christian and Celtic traditions are noticeable in the descriptions of the island’s features below:

Dún Bhaloir (Balor’s fort): Located on the eastern side of the island, the peninsula is surrounded on three sides by 90m-high cliffs, and is virtually impregnable. Balor’s fort is only accessible by crossing a narrow isthmus, defended by four earthen embankments.

An Eochair Mhór (The big key) is a long, steep-sided spur jutting from the east side of the peninsula and ending in a crag called An Tor Mór (the big rock).

Saighdiúirí Bhaloir (Balor’s soldiers): An Eochair Mhór has prominent rocky pinnacles known as Balor’s soldiers. They give the spur a ‘toothed’ appearance, hence the name, The big key.

The Wishing Stone’ is a precipitous flat-topped rock beside the northern cliff-face of Balor’s Fort. Traditionally, a wish is granted to anyone foolhardy enough to step onto the rock, or who succeeds in throwing three stones onto it. Please note: the rock is extremely dangerous, and visitors are strongly advised not to approach it. 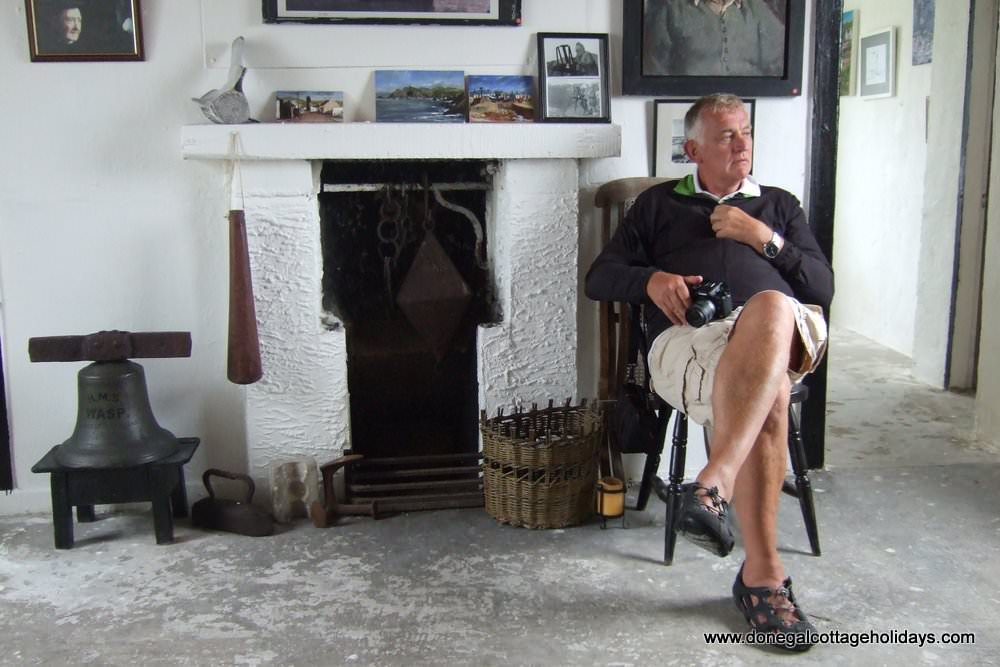 An Cloigtheach (The Bell Tower) is the most impressive structure to have survived the destruction of the monastery of Colmcille. A monastery was founded on Tory in the 6th century by Colmcille, an influential missionary of the day. The monastery dominated life on Tory until 1595, when it was plundered and destroyed by English troops, waging a war of suppression against local chieftains. The tower was built in the 6th or 7th century, probably to give warning of attacks from the sea.

The Tau Cross (a t-shaped cross) is believed to date from the 12th century. It is one of only two Tau crosses in Ireland (the other in Kilnaboy, County Clare).

The Tory Island ferry is operated by Turasmara and will take you from the fishing harbours at Bunbeg and Magheroarty to the Island on board Tormór, a fully equipped and certified coastal cruiser. The service is licensed by the Department of Marine and is approved and promoted by Tourism Ireland.

Móirsheisear (Church of the Seven): Móirsheisear, which actually translates as ‘big six’ – an archaic term for seven – is the tomb of seven people, six men and one woman, who drowned when their boat capsized off Scoilt an Mhóirsheisear (the cleft of the seven) on the island’s northwest coast. According to local superstition, clay from the woman’s grave has the power to ward off vermin.

The Lighthouse, standing at the west end of the island, was built between 1828 and 1832 to a design by George Halpin, a well-known designer of Irish lighthouses. In April 1990 the lighthouse was automated. The lighthouse is one of three in Ireland in which a reference station for the Differential Global Positioning System (DGPS) is installed. This satellite-tracking system, managed by the US Department of Defence, allows ships and boats to locate their position at any time.

The Torpedo: A torpedo can be seen midway between An Baile Thiar and An Baile Thoir. It washed ashore during World War 2 and was defused and erected at its present location.